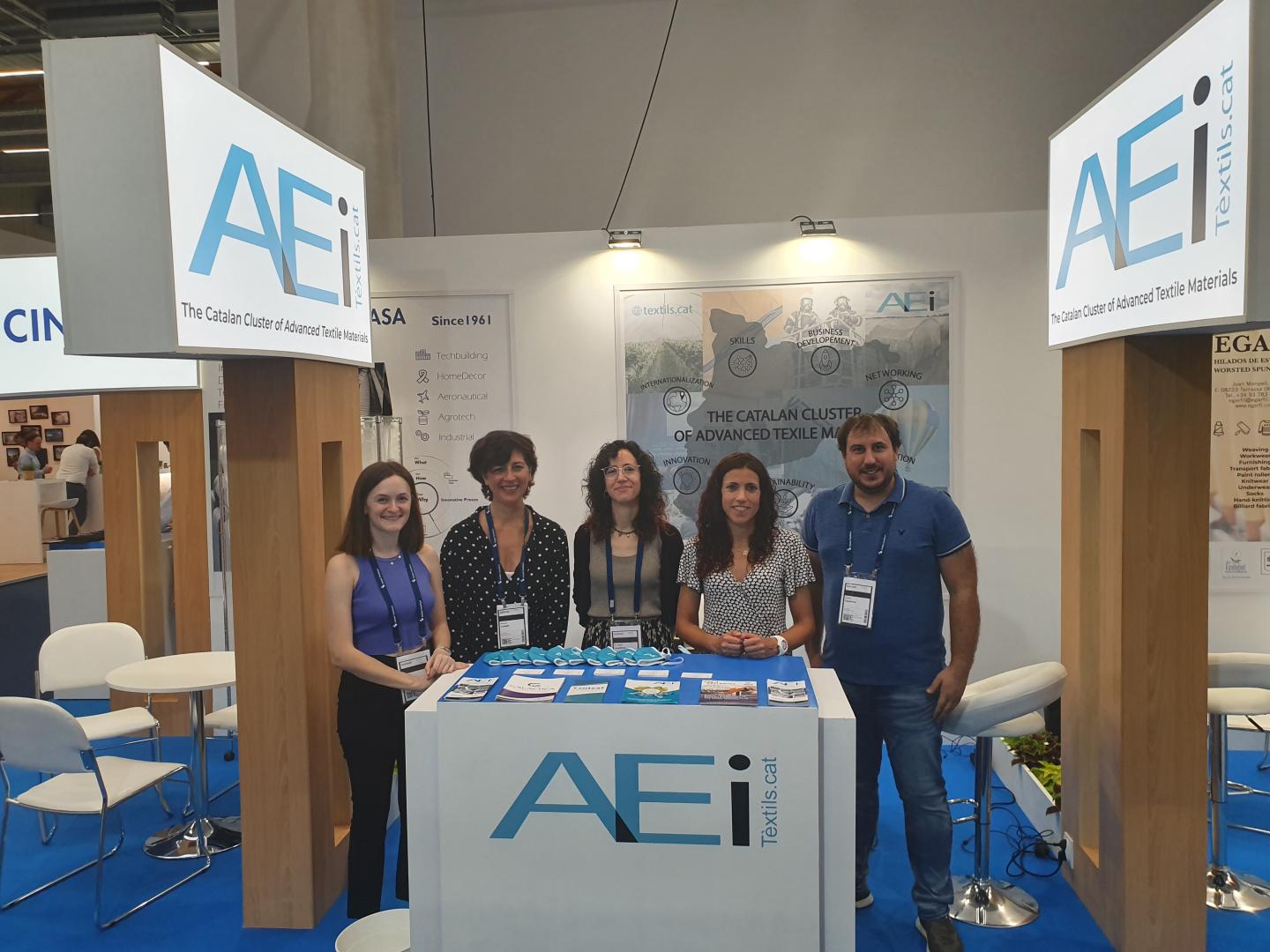 AEI Tèxtils, the Catalan Cluster of Advanced Textil Materials, participated in Techtextil 2022 from June 21st to 24th with a joint booth with several of its members: CINPASA, LIASA, FINSA, Pont Aurell y Armengol, and Hilados Egarfil.

In addition to cluster members participating in the joint booth, this year 7 cluster members have also participated with their own booth: MITSA, Grobelastic, E. CIMA, Marina Textil, C.P. Aluart, Velluts/VTS-Technical Textiles, and ANTEX.

During the four days in the trade fair, AEI Tèxtils organized and facilitated a series of activities to promote the networking of its members, offering space for meetings within its booth for cluster members without it, and organized an informal networking and cocktail to facilitate interaction among the members and with other partners of the cluster. The cluster also facilitated the participation of members in dedicated tours in the trade fair, both as visitors and as must-see success cases.

In addition, AEI Tèxtils also promoted the positioning of the Catalan advanced textile materials sector with a presentation in the Techtextil Forum of the different initiatives the cluster and its members are conducting in relation to sustainability and circular economy, highlighting the synergies of the Catalan textile industry and their good practices.

Lastly, the cluster is organizing the webinar “Panorama Techtextil 22” on July 20th to summarize major trends and innovations that were featured during this edition of the trade fair, as an exclusive service for its members.

AEI Tèxtils is supporting internationalization of its members through different projects, deploying added value services such as joint missions with custom agendas. Its current calendar includes missions to Vietnam (virtually) on September, California in February 2023, Techtextil North America in Atlanta (USA) in May 2023, Japan in July 2023, Canada in October 2023 and the participation to Techtextil 2024 in Frankfurt.

Projects are tools for the cluster to support strategically its members with services and pilot actions such as organization of business missions, facilitating networking and matchmaking services for its members with international partners

Clusters, like AEI Tèxtils, are great connectors and facilitators for the industrial ecosystem to promote, facilitate, and support the innovation process of its members, fostering the green transition and digital transformation, as a key contribution to the increase the competitiveness of the advanced textile materials sector and its members.