On May 5th Lombardy Region has officially approved The Lombardy Roadmap for Research and Innovation on Circular Economy which is providing a framework for the development of a sustainable, low carbon, resource efficient and competitive strategy for the transition to a more circular economy in the Lombardy Region, under a smart specialization perspective.

Lombardy Region introduced Circular Economy as one of the main drivers of regional economic, environmental and social development. According to the Roadmap, the shift towards a circular model will follow a mixed technology-pushed and a market-driven approach and it will go beyond incremental improvements fostering new collaboration mechanisms and business models.

In 2019, Lombardy Region launched a cross-sectorial roadmapping action involving multiple directorates and stakeholders, finalised to the identification of Lombardy R&I Priorities in Circular Economy. This process, leading to the definition of the Regional Circular Economy Roadmap was based on inter-cluster cooperation mechanism and it has been recognised as an opportunity to define a structured strategy to boost circular economy in the region starting from the needs and the priorities collaboratively pointed out by diverse regional stakeholders. 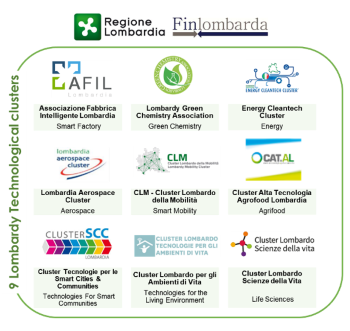 Indeed, the Roadmapping Group, coordinated by DG Research, AFIL – Lombardy Intelligent Factory Association, the regional technology Cluster representing regional Advanced Manufacturing, and Finlombarda, the regional finance in-house company, benefited from the participation of the 9 Lombardy Technological Clusters. Thanks to this collaboration it was possible to define the priorities characterising different Lombardy specialization areas leveraging on the contribution of clusters’ key stakeholders (companies, universities and research bodies).

In total 6 inter-cluster roadmapping meetings were organized, complemented with an additional workshop “Let’s build together the Lombardy Roadmap on Circular Economy” which took place in Lombardy Region to widely share with companies and other actors the methodology and to collect further inputs from the regional stakeholders (associations, universities, enterprises large and SMEs etc.). A public consultation was also launched by Lombardy Region in October/November 2019, asking stakeholders and citizens to define shared paths for sustainable development to be integrated as input in the definition of “Sustainable Development Strategy”. Once collected sectoral R&I priorities, they were aggregated and described according to the different steps of the circular value chain model, used as a driver for priority categorisation: 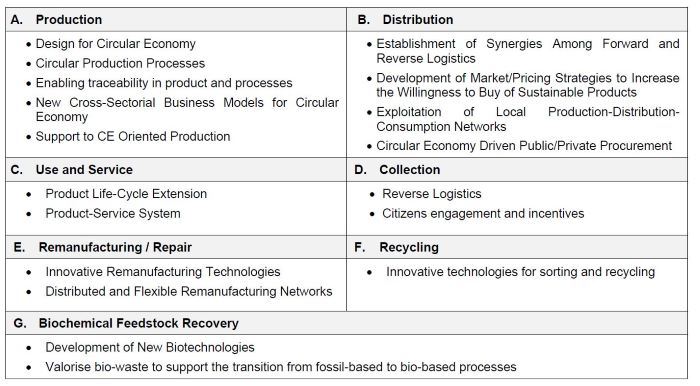 The work was completed with the inclusion of a series of systemic priorities to facilitate the transition towards Circular Economy (such as legislative factors, infrastructure needs, etc.). Moreover, in reaction to the COVID-19 impacting at global level and in particular in Lombardy Region, the Roadmap outlines how Circular economy can play an important role in these disruptive since it can make the regional manufacturing system more robust, resilient, and faster in the economy restarting phase.

Summarising, the Lombardy Roadmap for Research and Innovation on Circular Economy represents a versatile cultural and technical reference that can stimulate the cooperation between public and private stakeholders, with the aim to build strategic initiatives on circular economy. Based on the priorities of the roadmap, which are widely shared among regional stakeholders, private and public investors can cooperate to support emerging initiatives with financing instruments. This Roadmap will also contribute to the definition of the Smart Specialization Strategy of the Lombardy Region 2021-2027, within which the achieved results in terms of Circular Economy will also be valued. This positive inter-cluster experience will be repeated for the realisation of the regional roadmap on Artificial Intelligence. The process will officially start in June and, in addition to clusters, the main regional actors operating in the AI area will be also involved in the roadmapping group by the AFIL Cluster: DIH Lombardia, the Industry Competence Center 4.0 "Made", the Observatories of the Politecnico di Milano, the Joint Research Center of Ispra.

Going beyond the regional dimension, the document is well suited as reaction of Lombardy Region Government to the climate and environmental world challenges settled by ONU Agenda 2030 and to drive the sustainable transition on the territory. It is also the result of the long-lasting effort of Lombardy Region to cooperate with other Italian and European Regions in the definition of cooperation strategies, which reinforce regional competitiveness by exploiting synergies and complementarities to achieve wider critical mass for global competition (for example in the “4 Motors of Europe”, “Vanguard Initiative”, “S3 Platforms on Smart Specialization” of the European Commission). Thus, the implementation of roadmap priorities will lead to the reinforcement of inter-regional cooperation for the establishment of new European value chains. 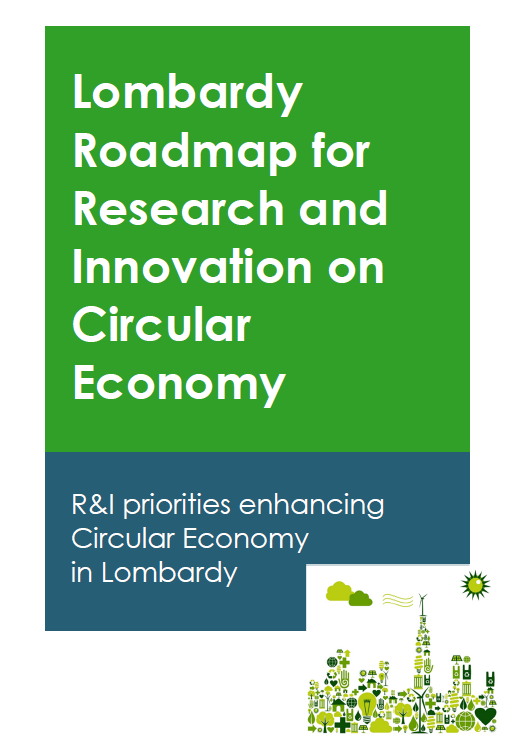