The European Association of Remote Sensing Companies (EARSC) and the Eurochile Business Foundation, on Friday 18th of May 2018 signed a Memorandum of Understanding (MoU), establishing a formal cooperation initiative between EARSC, responsible for promoting the use of Earth Observation (EO) technology and supporting companies in Europe which offer EO-related products and services, and Eurochile, responsible for promoting economic, trade, and technological cooperation between the private sector and institutions in Chile and the European Union, through business promotion, and the transfer of technology and know-how.

The MoU aligns perfectly with the objective of strengthening and deepening the working relations between the two entities in areas of mutual interests related to earth observation. EARSC and Eurochile strive to support in connecting European companies with Chilean companies with the aim of incentivising new opportunities for business, transfer of technology and innovation, and possible joint ventures or other collaboration mechanisms. This is particularly relevant given two key factors: (1) In February 2018, Eurochile was assigned the important task of representing in Chile the European Earth Observation Programme – Copernicus – as a member of the Copernicus Relay Network; and (2) In March 2018, the European Commission and the Chilean Government signed a Copernicus Cooperation Agreement to promote the programme in Chile.

“Eurochile is extremely pleased to formalize working relations with EARSC that opens up endless opportunities to work together, promoting the creation of new businesses in the field of space observation data within the framework of the Copernicus Programme”, Mr. Vicente Caruz, President of Eurochile said during the signing of the MoU at the Chilean Embassy in Brussels.

Mr. Geoff Sawyer, Secretary General of EARSC indicated that “we are delighted to sign this agreement with Eurochile following the Copernicus agreement signed between the European Commission and Chile. We consider that this opens excellent opportunities for European companies and those from Chile to work closely together”.

During the signing of the MoU, in the Embassy of Chile in Belgium, the Chilean Ambassador to the Kingdom of Belgium and the Grand Duchy of Luxembourg, Mr. Raúl Fernández Daza, highlighted the fact that “this agreement will foster the practical use of massive amounts of multi-source data and quality information through applications and platforms that will be designed by private companies for the benefit of Chile and Europe, in vast numbers of critical fields, such as land, ocean, emergency response, atmosphere, civil security and climate change”.

About the European Association of Remote Sensing Companies (EARSC) EARSC is a non-profit organisation aimed to promote the use of Earth-observation (EO) and European companies which offer EO-related products and services. Formed in 1989, the organisation has over 100-member companies from throughout Europe with a secretariat office in Brussels. EARSC is actively involved in coordinating and strengthening the EO chain and promoting the European geoinformation industry, and also providing a unified voice on wider European and global issues of importance to the industrial sector. 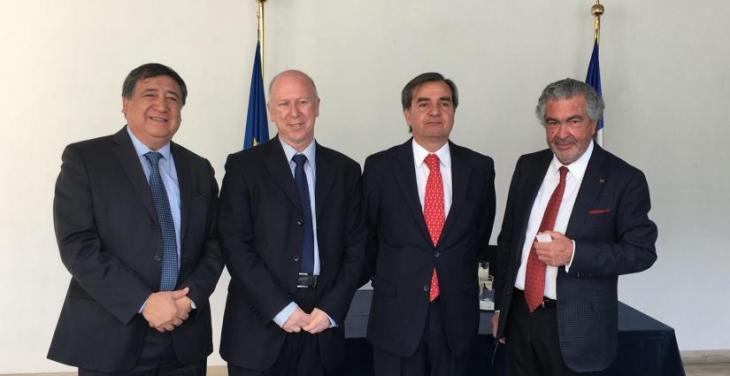