From events for cheese and spice sommeliers in Kulmbach and Veitshöchheim to a seminar on bonding plastics in Lüdenscheid to the1st East Brandenburg concrete round table in Rüdersdorf - the second Cluster Week showed once again: Germany's clusters are creative, diverse and innovative. From 2 to 11 April 2019, cluster initiatives from all 16 German states took part in Cluster Week Germany with almost 200 events and trade fair participations, and also carried out many activities with international partners such as Sweden, Israel, Canada, Portugal, the Netherlands, France and Great Britain. State Secretary Claudia Dörr-Voß (BMWi) and State Secretary Christian Luft (BMBF) thanked all participants for their great commitment at the annual conference of the "go-cluster" programme on 11 April, which also marked the end of the Cluster Week.

The HANNOVER MESSE marked the start of this year's Cluster Week: Federal Ministers Peter Altmaier and Anja Karliczek gave the starting signal for the 2nd Cluster Week Germany in their speeches at the Leaders' Dialogue of the Platform Industry 4.0 in their function as patrons. At the same time, Dr. Ole Janssen, head of the Innovation and Technology Policy Division at the Federal Ministry of Economic Affairs and Technology (BMWi), and Jürgen Wengel, from the department "Instruments for Innovation Promotion; Jump Innovations" at the Federal Ministry of Education and Research (BMBF), officially opened the stand in Hall 2. During his tour of the fair, Federal Minister for Economic Affairs and Energy Altmaier once again stressed the importance of clusters for the German economy and called for active participation in the Cluster Week. With success: at the end of the week, 158 events and 38 exhibition stands were registered on the cluster platform. A look behind the scenes of the successful work and the diversity of cluster initiatives is also provided by the eight reports from eight federal states that were published in the course of the Cluster Week.

The HANNOVER MESSE was also used for international cluster exchange. A cluster matchmaking organized by the "go-cluster" program with this year's partner country Sweden offered more than 40 participants the opportunity to get to know each other and explore cooperation potential on April 3.

The "Main Anchor Event" of the "European Cluster Weeks" on April 1 at HANNOVER MESSE also had the international perspective in mind. EU Commissioner Günther Oettinger and Dr. Ulrich Nussbaum, State Secretary at the Federal Ministry of Economic Affairs and Energy, opened the European Commission's two-day event in Hanover. In addition to cluster representatives from Europe, a cluster delegation from Canada was also present.

With the most important German cluster event, the annual conference of the "go-cluster" programme on 11 April, the 2nd Cluster Week was concluded in the BMWi.

The "Cluster Week Germany" was launched in order to highlight the work of the German cluster initiatives and their impact on the regions even more strongly. BMWi, BMBF and the states support a forum that promotes the exchange between science and industry and illustrates the innovation potential of cluster initiatives.

The article was published on 12/04/2019 on www.clusterplattform.de website, here. 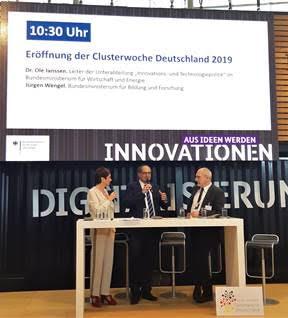