Submitted by Camille DURAN on 08 December 2016

One of the highlights of the 2016 European Cluster Conference (Brussels, 1-2 December 2016) was the Award Ceremony that this year had a double acknowledgement: for the best Cluster Manager of the Year and for the excellence of a EU Cluster Partnership in promoting internationally the partnership’s activities for the benefit of SMEs.

The Cluster Manager of the Year 2016 Award went to Bianca Dragomir, General Manager of AVAESEN (Spain) and Energy in Water (EnW) won in the category EU Cluster Partnership 2016 Award.

The Cluster Manager of the Year Award Ceremony

This year, after all the cluster manager applications had been evaluated, the international jury shortlisted 4 European candidates, to compete and pitch in front of the audience at the European Cluster Conference 2016.  The audience could make then its choice via an online voting tool.

The winner of the audience vote was Bianca Dragomir, cluster manager of Valencian Region Renewable Energy Cluster (AVAESEN) (Spain), who has become the Cluster Manager of the Year 2016. During her pitch, she explained how she had tried to “reinvent their cluster concept” during her 4-year tenure. 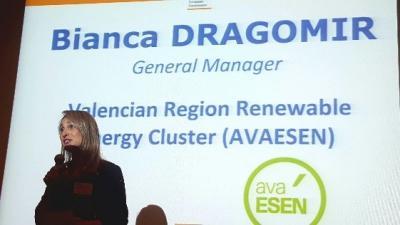 The Cluster Manager of the Year 2016 was given the opportunity to participate in the closing remarks of the Conference: “I take this Award as a strong motivation to keep challenging and reinventing the cluster concept beyond its traditional boundaries, but also as an encouragement and inspiration to other European clusters to also pursue their efforts. European clusters are business and innovation impact multipliers and we need to make the most of them” said Ms Dragomir. Today AVAESEN is a bronze label cluster with 120 members, an increase of 25% over two years. It is also a partner in the European Strategic Cluster Partnership for Going International (ESCP-4i) named “Energy in Water”, which was elected EU Cluster Partnership of the year 2016 at the same occasion.

The European Cluster Collaboration Platform together with EASME and DG Growth of the European Commission had also launched the “EU Cluster Partnership Award 2016: rewarding ESCP-4i Projects’ Communication Activities.”, for the first time. 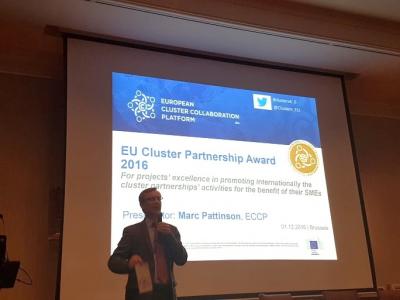 Marc Pattinson, Manager of the ECCP, moderating the Award Ceremony

Following the 3 individual presentations of the projects’ international promotional activities, the audience voted for the best candidate and the award went to Energy in Water (EnW). 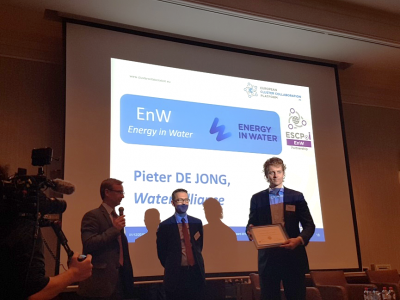 What makes the EU Cluster Partnership “Energy in Water (EnW)” an award-winning partnership? Pieter de Jong, the Water Alliance (NL) explains: “ESCP-4i project Energy in Water (Enw) is a network of clusters that intensively cooperate. In total 7 clusters from 6 EU countries are connected and 650 SMEs are reached through their network. The cluster organisations are: The Water Cluster (UK), AVAESEN (ES), CD2E (FR), Clean (DK), ZINNAE (ES), EA Eco Entreprises (FR) and Water Alliance (NL). The international collaboration started right after the ESCP-4i kick-off meeting in Brussels, where ERRIN organised a networking event with the European and Latin American Technology based Business Network (ELAN). Contacts were established with counterparts from Columbia, Mexico and Brasil, with whom International Cooperation Agreements (ICA) will be signed early 2017. The first ICA has already been signed with AMEPA in Morocco and Tunisia also expressed interest. […] The partnership will continue to work on the international dimension and support the internationalisation of SME members”.

EnW has developed the website www.energyinwater.eu, which includes an SME search database and to which other ESCP-4i partnerships and other EU clusters are invited to collaborate. EnW regularly disseminates e-newsletters and published numerous news items on the ECCP, in addition a twitter account had been set up @energyinwater.

Congratulations to Bianca Dragomir, AVAESEN, Cluster Manager of the Year 2016, who succeeds Stan Higgins, from NEPIC, elected in 2014, as well as to the Energy in Water ESCP-4i which has become the first EU Cluster Partnership of the Year Awardee. 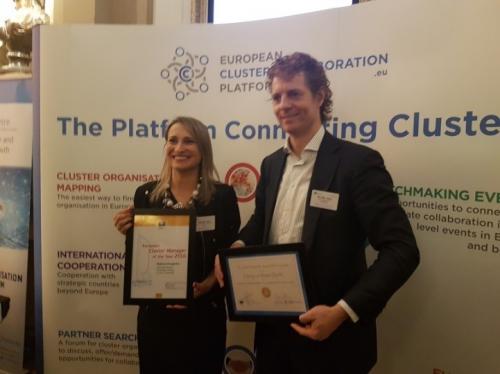 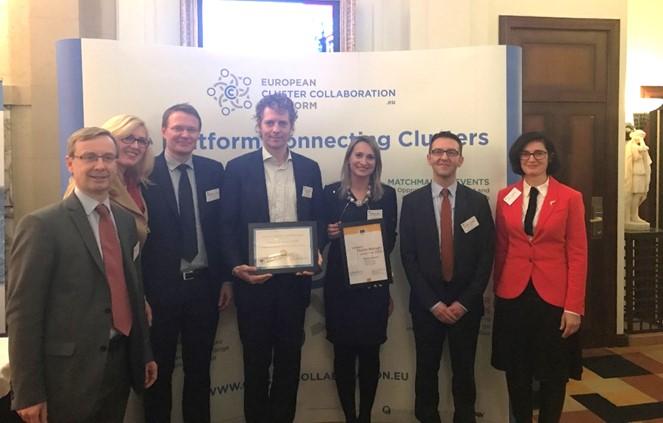