Submitted by Imogen Allan on 05 November 2021

The governments of South Africa, France, Germany, the United Kingdom, the US and the EU have announced a new ambitious Just Energy Transition Partnership to support South Africa’s road to decarbonisation.

The partnership was announced at the COP26 climate conference in Glasgow. Germany noted that it plans to invest €700 million as part of the plan, which is also backed by the UK, France and the EU.

The Partnership will mobilise $8.5 billion for the first phase through grants, loans and investments and funds from the private sector. The aim is to accelerate the decarbonisation of South Africa's economy, with a focus on transforming its electricity system. It is expected to prevent up to 1-1.5 gigatonnes of emissions over the next 20 years and support South Africa’s transition from coal to a more resilient climate model.

The Republic of South Africa's Head of State, President Cyril Ramaphosa, expressed his support for the declaration: “South Africa welcomes the commitment made in the Political Declaration to supporting the implementation of our revised Nationally Determined Contribution, which represents our country's ambitious effort to support the global battle against climate change.

“We look forward to a long-term partnership that can serve as an appropriate model of support for climate action from developed to developing countries, recognising the importance of a just transition to a low carbon, climate resilient society that promotes employment and livelihoods.”

Adding to this, European Commission President Ursula von der Leyen noted: “This partnership is a global first and could become a template on how to support just transition around the world. By joining forces, we can speed up the phasing out of coal in partner countries, while supporting vulnerable communities that depend on it. Ensuring a just transition is a priority for the EU, both at home and abroad.”

Delivering on this ambition will affect mining communities and workers. The Partnership will identify financing options for innovative technical developments and investments, including electric vehicles and green hydrogen to create more green jobs.

The announcement is an example of collaboration between an emerging economy and international partners to limit global warming. It is open to countries who that would like to provide financial aid and further boost South Africa's clean energy transition.

Find out more about the Partnership here. 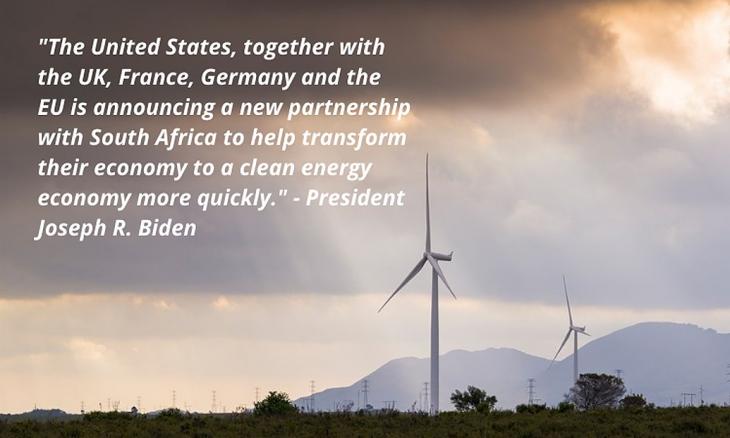