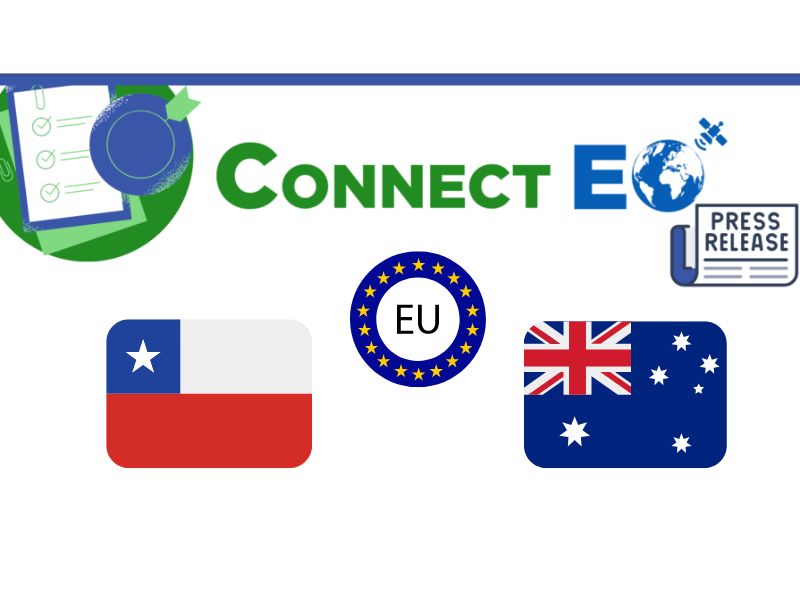 - More than 144 B2B meetings have been organised.
- These trade missions aim at connecting ConnectEO beneficiaries with relevant stakeholders from the agricultural and maritime sectors in Chile and Australia.
Funded by the EISMEA under the COSME Clusters Go International programme, the ConnectEO project aims to promote and foster market access between the European Earth Observation (EO) SMEs and two target countries: Australia and Chile. The project has focused on the use of EO addressing business opportunities and key socio-economic/environmental challenges in the maritime and agricultural sectors.

During the final phase of the project, four online trade missions as well as a series of B2B meetings have been organised by target country and sector, as follow: AG-CH (Agriculture Chile), MAR-CH (Maritime Chile), AG-AUS (Agriculture Australia) & MAR-AUS (Maritime Australia). The whole organisation has been coordinated by CTA, EARSC and PMBA; and supported by partners based in the target countries; Eurochile for the trade missions and B2Bs in Chile and FrontierSI for Australia.

These trade missions aimed at connecting ConnectEO beneficiaries with the relevant stakeholders from the targeted countries and sectors. The European companies expressed great interest in meeting with the in-country stakeholders (companies, private and public institutions), once the trade missions were over most SMEs found areas of collaboration. The meetings held were a very promising first steps, which are expected to obtain results in the medium and long term.

ConnectEO SMEs confirmed that there is a niche market for the maritime and agriculture sector in Australia and Chile. The future industries 4.0 & 5.0 represents a great opportunity for European SMEs developing Earth observation products and services that could address the sectors’ challenges.