The Cosmetic Victories - the winners are...

Submitted by Ségolène LELOUTRE on 14 June 2019

For the 25th anniversary of the COSMETIC VALLEY cluster,

the jury of the COSMETIC VICTORIES 2019

hosted by the Ministry of Finance, awarded its prizes

to a Japanese team and a Belgian team. 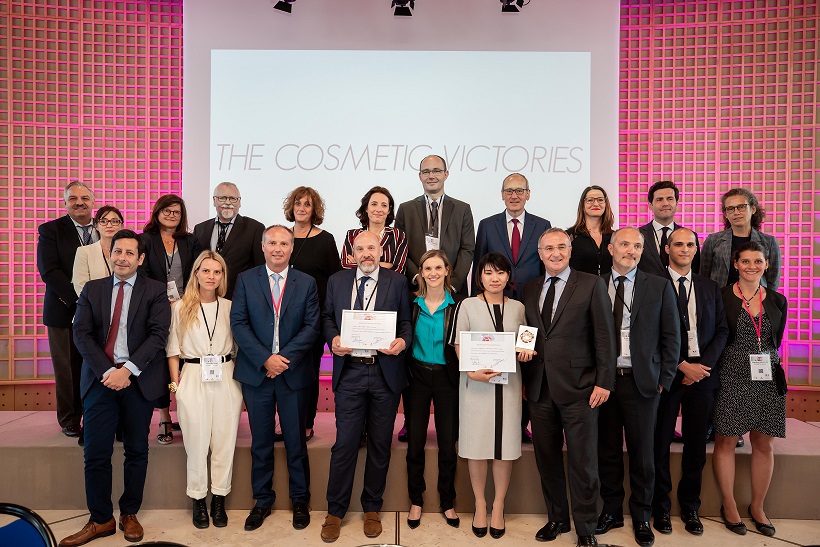 As COSMETIC VALLEY was celebrating simultaneously its 25th anniversary and its fourth accreditation by the State as national coordinator of the cosmetics sector, of which it remains the one and only competitiveness cluster, the fourth COSMETIC VICTORIES competition took place from 3 p.m. to 7 p.m., at the Finance Ministry, under the patronage of the Minister of Economy and Finance, Mr Bruno Le Maire and in the presence of the Secretary of State, Mrs Agnès Pannier-Runacher who reassured the 200 business leaders present that the Interministerial Funding programme that finances their cooperative projects will be funded in September, that the cluster and Business France would be developing a system for intelligent cooperation to support SMEs in the export sector and that French cosmetics deserved a French Tech label.

As during its COSMETIC 360 trade fair (the 5th edition of which will take place on 16 and 17 October at the Carrousel du Louvre), COSMETIC VALLEY once again gave impetus to the creative talents of tomorrow. THE COSMETIC VICTORIES competition has set itself the triple objective of detecting and revealing innovative start-ups, supporting their projects and promoting research and science in the field of fragrance and cosmetics from a scientific and academic perspective.

Out of 90 projects from 14 countries, the two winners of the prize founded by COSMETIC VALLEY and ESSEC were chosen for the innovative and concrete solutions they provided in the fragrance and cosmetics sector. The Academic Prize (basic research) was awarded to Mrs Kie Nakashima, from Osaka University in Japan, for the new generation antiperspirant project (by hypnosis of the sweat glands). The Industrial Prize (applied research) went to the Brussels-based company CHEMCOM for its project on artificial mechanisms (through olfactory sensors throughout the body) for tanning or skin depigmentation.

Open to teams working on the most advanced and original cosmetic projects, this unique competition derives its legitimacy from a particularly demanding selection process based on filters developed by several top-level international expert associations. The final jury under the co-chairmanship of France Télévision journalist Laurence Dorhlac and the Secretary General of the LVMH Group, Marc-Antoine Jamet, President of COSMETIC VALLEY was composed of professionals representing French and international SMEs, large corporations, niche companies and start-ups from L'Oréal, LVMH, Rodan & Fields, Nuxe, Guerlain, Yves Rocher, Coty, Sisley, Alexandra Jubé, Officine Universelle Buly, as well as experts from the Société Française de Cosmétologie and the Société Française des Parfumeurs, the BPI, the DGE and the CNRS, along with the two founding members of the Prize, COSMETIC VALLEY and ESSEC.

The two prize-winners each receive a grant of €10k and help from the Cosmetic Valley cluster in the form of support on the Cosmet’up platform dedicated to boosting development of innovative projects in the fragrance and cosmetics sector, and publicity including national and international media coverage. Marc-Antoine Jamet reviewed the performance of a sector that with 3,200 companies, 240,000 employees and 8,000 researchers, generates turnover of €45 billion, exports of €14 billion, a positive balance of €112 billion, the second largest in our trade balance, spends €650 million on research each year and pays €11 billion in taxes in France.

The ceremony was dedicated to Marie-Alice Dibon, a member of the jury last year, who died tragically last April at the age of 53. She was a skin microbiome expert and the founder and president of Alice Communications Inc.