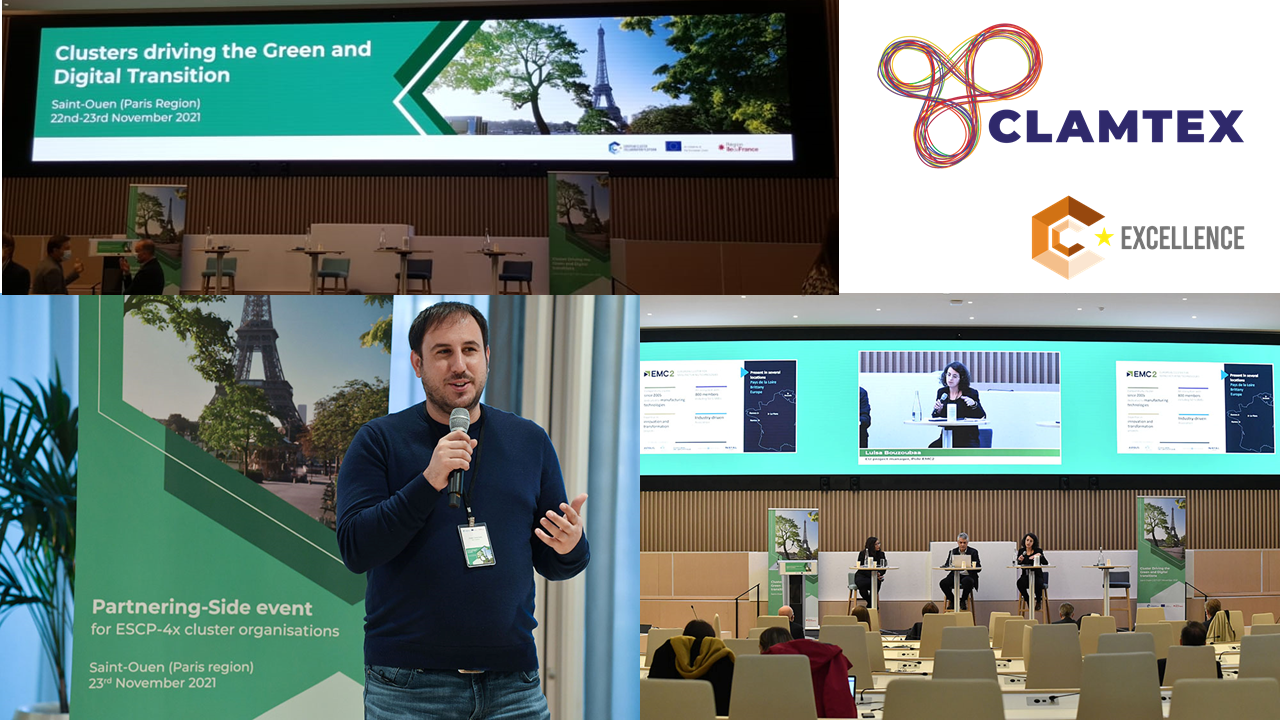 The European Cluster Strategic Partnerships for Excellence, CLAMTEX - Cluster management towards excellence in Advanced Manufacturing and Textile Industry, participated in the Policy Learning and Capacity Building event on Clusters Driving the Green and Digital transition, organized by the European Cluster Collaboration Platform, the European Commission and Ile-de-France Region, on November 21st and 22nd.

During the two-day event, several speakers talked about how clusters can accelerate the green and digital transitions in European companies, leveraging different tools and experience from across Europe.

AEI Tèxtils, as coordinator of CLAMTEX, and EMC2 representative participated in the on-site event in Paris for the two days. CLAMTEX partners had an important role during the second day speaking about the different financing models to support the twin transition, giving as example the new service developed by AEI Tèxtils called the “Road” with which the cluster is supporting a set of members in defining the roadmap for future investments to accelerate the green and digital transition. EMC2 was also featured giving a talk about industry 5.0 and the future trends.

On the afternoon of the second day focused as “Partnering-side event for ESCP-4X”, where AEI Tèxtils also shared its recent experience with ClusterXchange program held in the past weeks. Josep Casamada, as project coordinator, highlighted the value of high-quality group events such as the recent digitalization mission to Portugal organized by the cluster as key success factor.

The event ended with a hands-on training session on how to build and strengthen cross-sectoral collaboration among clusters to thrive the digital and green transition. In the next months, CLAMTEX will continue implementing several activities and pilot actions to support the competitiveness of SMEs, members of the partnership.

CLAMTEX is one out of 13 funded consortiums at European level. The CLAMTEX partnership is composed by five clusters, AEI TÈXTILS in Catalonia, ATEVAL in Valencia, PRODUCTECH and the Textile Cluster both in Portugal, and EMC2 in France.

The project, co-funded under the COSME program from the European Union, aims to strengthen cluster management excellence to boost the specialized technical textile innovation eco-system by promoting the cross-sectoral and cross-regional collaboration to facilitate the uptake of digitalization within and beyond the partnership.