Submitted by Alina Danieles… on 12 December 2016

The EU Cluster Partnership Award provides an opportunity for ’ESCP-4i projects’ to showcase their excellence in promoting their partnership activities through various channels, including the ECCP. All European clusters partnerships which received the ESCP-4i label were invited to participate.

Following the 3 individual presentations of the projects’ international promotional activities, the audience voted for the best project and the award went to Energy in Water (EnW) project. 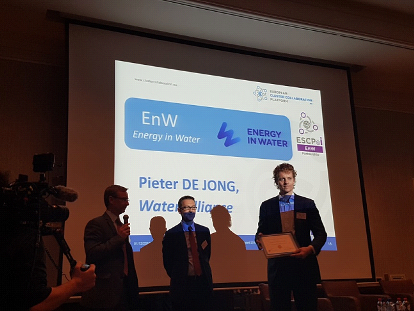 ECCP: Which clusters are behind the EU Strategic Cluster Partnership “Energy in Water (EnW)?

ECCP: What countries beyond Europe are in the focus of the partnership for international collaboration?

Pieter de Jong: The international collaboration started right after the ESCP-4i kick-off meeting in Brussels, where ERRIN organised a networking event with the European and Latin American Technology based Business Network (ELAN). Contacts were established with counterparts from Columbia, Mexico and Brasil, with whom International Cooperation Agreements (ICA) will be signed early 2017. The first ICA has already been signed with AMEPA in Morocco and Tunisia also expressed interest.

Cluster organisations and SMEs from EnW network participated in the EU-Mexico matchmaking event (Mexico DF, October 2016) and in the EU Brasil matchmaking event (Pollutec France, November 2016). EnW has also already established contacts with 10 widening countries. The partnership will continue to work on the international dimension and support the internationalisation of its SME members.

ECCP: How exactly do you support your SMEs to internationalize? What kind of activities did the partnership undertake to bring forward the cooperation?

Pieter de Jong: EnW has developed the website www.energyinwater.eu, which includes an SME search database and to which other ESCP-4i partnerships and other EU clusters are invited to collaborate. The database supports end users/ clusters to find complementary partners/ technology developers. Already 180 innovative SMEs in the Energy and Water nexus are actively involved in this database. EnW regularly disseminates e-newsletters and published numerous news items on the ECCP Platform, in addition a twitter account had been set up #energyinwater. Several events have been organised: EnW hosted the first Challenge response workshop in Copenhagen and Water Alliance hosted a workshop during the European Week of Regions and Cities. In addition some of the start-ups related to the EnW network (e.g. AVEASEN member Apa Water) participated in the European WaterCampus Business Challenge (EWCBC), which connects start-ups and SMEs with end users and venture capital.

A lot has already been already performed within the first 10 months of this project. And all the EnW members are very proud of winning the prestigious title of “EU cluster partnership award 2016”. It motivates everyone even more to prepare for the next phase.

ECCP: What do you think is that special “extra” factor that made the audience of the European Cluster Conference to vote for your partnership out of the three finalists:

Pieter de Jong: This is difficult to answer, but maybe it could have been also our focus on the global value chain. As Marc Lemaître, Director-General for Regional and Urban Policy, mentioned during the European Cluster Conference 2016 there needs to be a marriage between clusters and RIS3. ESCP-4i projects support SMEs to gain access to the global value chain (GVC), this value chain starts at home. Innovative SMEs are in need of demonstration sites and launching customers, these cannot always be found within the same region. EnW partners try to connect this supply and demand.

With an effective RIS3 strategy a regional cluster and knowledge triangle can grow beyond the regional dimension, into national and even a European node, where a critical mass for science & business intelligence is formed. It forms a focal point where scientific breakthroughs occur, venture capital frequently attends, international trade missions are received and SMEs can meet with end users. Other nodes can benefit by connecting to their networks, this way a European web is formed, with international trade, science and business dimensions. This would be the ideal marriage between RIS3 and cluster policies. In this context EnW is already preparing a proposal for ESCP-S3, in which widening participation will play an important role. EnW partners look forward to take European strategic cluster partnerships to a whole new level.”