The CEEC awarded prizes to the best projects developed by start-ups in the efficient energy sector in Catalonia.

The cluster honoured the Fuel Poverty Group for its work in the fight against energy poverty.

Miriam Santamaría, geographer and journalist, has been awarded the 2018 Communication Prize.

Barcelona, 21st June 2018 – The Cosmocaixa Auditorium hosted the sixth edition of the Efficiency Night, organised by the Catalan Efficient Energy Cluster (CEEC), which this year celebrates its 10th anniversary. The event, presented by IMPRO Barcelona and chaired by the Minister for Enterprise and Knowledge, Àngels Chacón, was attended by nearly 500 guests who enjoyed a night focused on rewarding the most relevant projects in the Catalan energy sector. The Night was sponsored by Bonfiglioli, Rockwool, TÜV Rheinland, ARCBCN, Auren, BAXI, CYDESA, Energy Tools, Holtrop SLP, Prat Rubí Advocats, Salicru, Seinon, Socomec, Mútua dels Enginyers and Nissan.

Xavier Farriols, president of the CEEC, welcomed the audience and stated that the cluster has a clear objective: "To lead energy transition, we must work as a network, since there is not a single solution, but rather it is the sum of many parts”. Furthermore, he added that "Catalonia must act decisively to achieve an efficient energy transition model that reduces environmental and economic problems."

The Councillor for the Mayor’s Office, Water and Energy of the City Council of Barcelona, ​​Eloi Badia, described the Night as an event full of talent, wit and future. In addition, he affirmed that the Barcelona city council has witnessed how the paradigm of energy is constantly changing. In particular, "we verified that during the Week of Energy, held a few weeks ago, the ecosystem is becoming increasingly innovative."

During the ceremony, the conference Blockchain and the new energy model was held by Ignacio Madrid Benito, digital director at Everis, who stated that blockchain should be a useful technology to share value among people in a simple and fast manner. "Increasingly, blockchain is gaining more strength in the energy efficiency sector, in areas such as shared consumer goods, where there are already buildings in which the owners use blockchain as a tool to pay for the energy they consume". Benito advised that now is the time to be creative and innovate, "to know what role to play in the energy transition model."

BEST PROJECTS IN THE “EMERGENT AWARDS”

The first edition of the “EmErgEnt Awards”, held in the 10th anniversary of the CEEC, were awarded sponsored by Mutua d'Enginyers. The most relevant projects in the field of energy management developed by start-ups in the efficient energy sector in Catalonia were awarded prizes.

The winners were: in the Seed category, the project "Selective membranes for the separation of CO2: Capture and purification", by Orchestra Scientific. In the Product category, the awarded project was "IDPR Intelligent Distribution Power Router"  by TeknoCEA.

Among other things, the winners can participate in the study mission to be carried out by the CEEC during 2018 in California.

HONOUR FOR WORK AGAINST ENERGY POVERTY

Furthermore, the Cluster awarded an honour to the Fuel Poverty Group for its work in fighting against energy poverty through the promotion of the rights and responsibilities of energy users. It has also worked to improve the energy culture in society through education and social awareness of the efficient use of energy and it has had a political impact by moving towards a fair and sustainable energy model.

During the Efficiency Night, the 2018 Communication Award, a prize that recognises the work of professionals and the media in the dissemination of projects and initiatives in the energy efficiency sector was awarded. Xavier Farriols and Xavier Pons of Nissan gave the prize to Miriam Santamaría, geographer and journalist.

Àngels Chacón, Minister of Enterprise and Knowledge of the Generalitat de Catalunya, concluded the event with a speech where she emphasised that "the companies and the collaborators of the CEEC oversee the generation of wealth and innovation in Catalonia. We have a diverse, productive fabric with a competitive and innovative economy that we have to promote. In this context, we must continue to foster public-private collaboration as we have done so far. The Cluster is an example of the good results that can be obtained by creating this collaborative network. " 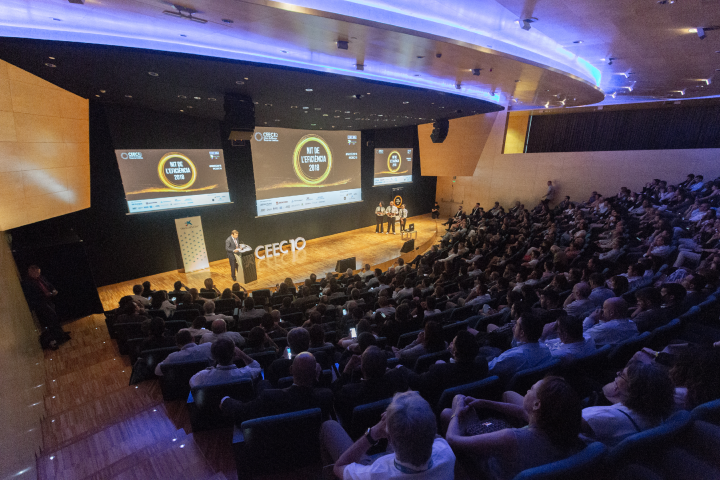