Bianca Muntean, the director of Translvania IT Cluster, was granted the Award of "EU Cluster Manager of the Year 2019" by the European Commission at the European Clusters Conference 2019 that took place in Bucharest during 14-16th of May.

The European competition brought together cluster managers from all European countries, specialists and experts in clusters and cluster related topics. Following a multi-stage selection, Bianca Muntean, who was voted for this title by the participants at this event, competed for the award along with two great cluster managers, Maria Hollander, manager of the Paper Province cluster in Sweden, and Lubos Komarek, manager of the Nanoprogress cluster in the Czech Republic.

"The greatest joy that this prize brings to our community comes from the recognition of the quality of our projects, of the good practices we have proposed and especially of the ‘Cluj model’ that is increasingly spoken of in Europe. This is proof that Eastern Europe has a say in the future of clusters in the European community. The creation of a functional and dynamic ecosystem that succeeds in representing its specific interests at the same time as the development of collaboration and interconnection relationships are proving to be the assets of Cluj. This award is certainly an acknowledgment of all the efforts made in recent years by our entire community. The vote and the trust  given to me for obtaining this status from the European Commission truly honors me. I applaud the efforts of all the candidates and look forward to joining forces to promote clusters at a European level. The eco-system approach and not the ego-system approach is the one we will apply in the coming period. We will keep you all posted over the next year with news about our initiatives, projects and activities. I am looking forward also to work closely with EC’s DG GROW, Unit for Advanced technologies, Clusters and Social Economy team”, says Bianca Muntean. 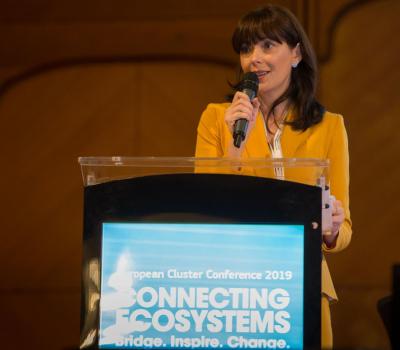 Bianca Muntean is one of the most active vectors to promote trans-sectoral cooperation in the Northwestern region and Romania's presence at the international discussion forum on technology and human resources involved in R&D and innovation. At the same time, she is actively involved in the community she represents by participating in key projects such as Digital City, eHealth / Wellbeing, Robotics, in order to attract funding and investment in innovation, as well as supporting community-based innovation processes through partnerships with the local Public Administration and the universities in Cluj.

One of the benefits this title offers to the winning community is the opportunity to promote Cluj, Transylvania and Romania as, well as Eastern and Southeastern Europe as an area of ​​major global importance in the field of information and creative industrial technologies.

As an added bonus, the international recognition of cluster activity and its team of experts outline the framework for attracting local projects in the field of digitization and the promotion of cross-sectoral innovation.

Cluj-Napoca is recognized at national and European levels as the "Cluster Capital of Romania", because this is the home of the Northern Transylvanian Cluster Consortium, which includes Transylvania IT Cluster, the Transylvanian Furniture Cluster, Agrotransilvania Cluster, the Energy Cluster Transylvania and the Creative Industries Cluster. These clusters collaborate cross-sectorally through various national and European projects and initiatives, whilst representing the engines of the Transilvania Digital Innovation Hub.

The "Cluster Manager of the Year in Europe" award is offered to European cluster managers, giving them the opportunity to showcase their work and successful projects. The European Union promotes through this distinction the excellence of European cluster initiatives.

The “EU Cluster Manager of the Year” Award is organized by the European Observatory on Clusters and Industrial Changes, in collaboration with the European Cluster Collaboration Platform, where the call for applications is published.

About Transilvania IT Cluster

Transilvania IT Cluster (formerly known as iTech Transilvania) was set up in 2013 by ARIES Transilvania, the largest and most influential organization created for the IT&C industry in Romania. At the moment, the cluster counts over 100 members, a total turnover of over 350 million euros and more than 6,000 employees, with a total of 118 members (universities, local public authorities).

Bianca Muntean holds the position of Transilvania IT Cluster Manager since 2011. She is also the owner of the Innovation Luminary Gala Award - "Young Bridger and Curator" (2017), offered by DG Connect on the occasion of Open Innovation 2.0 Conference.